Little Yorkie Goes on an 18 Month, 75 Mile Adventure by Himself! 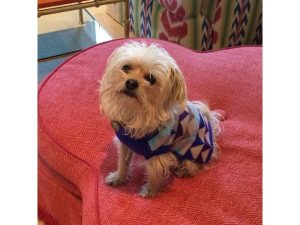 Yogi Bob is a brave and adorable little Yorkshire Terrier living in East Hampton, New York who has been recently reunited with his owners after nearly a year-and-a-half since he went missing.

When Yogi Bob went missing, her family did everything they could to find him  They set up social media pages, posted hundreds of flyers and even spent $5,000 to hire professional dog trackers from Ohio, who were able to track Yogi Bob’s movements, but were unable to coral the little dog, who would run off whenever someone got too close.

Needless to say, Yogi Bob’s owner, Dominique Garstin, was happily surprised to get the call that her beloved Yorkie was safe and sound 16 months after they started their search.

“It’s so wild. He’s so tiny, he’s such an itty bitty little creature, that it’s just amazing he survived this long,” Garstin said.

Yogi Bob was rescued by Christie Fanti, an animal behavior evaluator living in Hempstead, NY.  She was tipped off on the missing Yorkie after after she received a report of a stray in town, she said.  In a rare bit of luck, Fanti recognized Yogi Bob from her previous job in the Town of East Hampton’s animal control department.  Fanti couldn’t believe that the little Yorkie had managed to walk 75 miles on his own, but decided to send a photo of the dog to Garstin on Facebook just in case. Garstin said Fanti’s picture looked the most like her dog out of any leads she had received so she drove out to the Hempstead Animal Shelter on Monday afternoon and sure enough, Yogi Bob crawled into her lap and began to lick her face. Fanti said the shelter confirmed the dog matched Yogi Bob’s description in medical records — namely, a distinctive knee condition — before releasing him to Garstin on Tuesday. 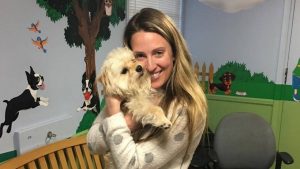 Garstin noted that she’s now sure how Yogi Bob ended up in Hempstead. She suspects he may have gotten a ride by someone who found him before escaping again or being abandoned.  Irregardless, she’s happy Fanti contacted her and that Yogi Bob is back with her family safe-and-sound.